Imagine living with David Blaine. He’d constantly be doing little things that blow your mind because you don’t know the trick. Fortunately for you and your sanity, David can explain the trick to you if he chooses to. Dogs don’t have the benefit of being able to understand the trick, even if it’s shown to them. They live in a constant state of wonder. No wonder they’re so happy most of the time; their life is a never-ending magic show. If ignorance is bliss, then wonder is ecstasy. 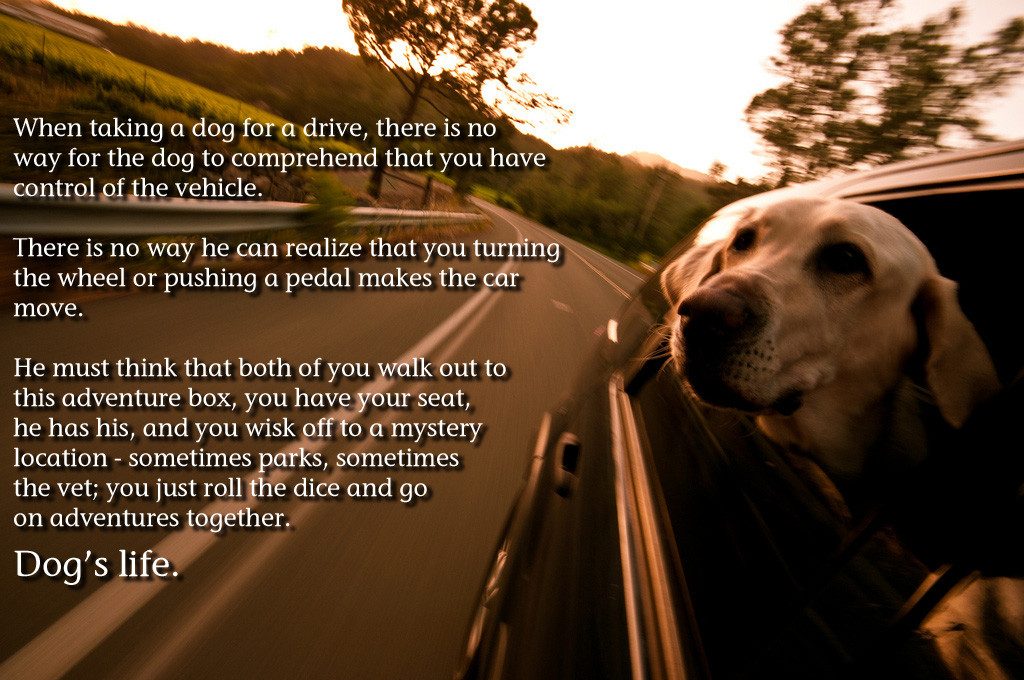 One evening, Zeke, Spotty and I were out for our regular walk. There’s a major street named Westview Drive about a block and a half north of our house. We often use it as a walking route to the local dog park, because it has a wide grass strip between the road and the sidewalk. It’s noisy, but it’s safe and the dogs can stay off of the hot concrete. It’s not connected to our street. You have to drive a block or so to get to the main entrance to our neighbourhood, and from there you can access the residential street our house is on. There are no houses between our street and Westview Drive, only the sidewalk and grass. 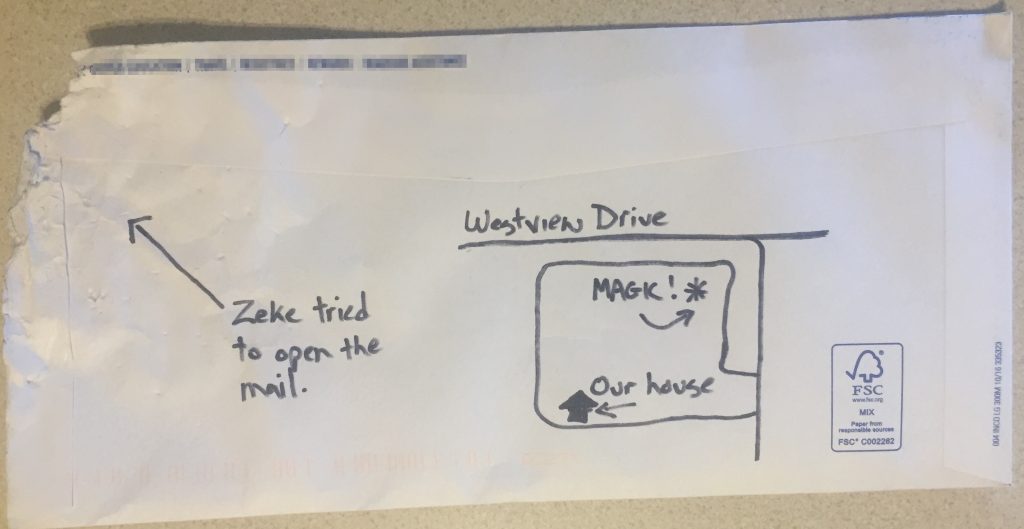 Jane had taken the kids to the swimming pool and was returning home via Westview Drive. The dogs and I were walking with the flow of traffic and somehow missed seeing our van go past us (we were probably sniffing a telephone pole or deep in discussion). Jane saw us though. She turned into the neighbourhood and parked on the residential street so that she and the kids would be in a position to intercept us, and waited.

They all got out of the van and hid behind it until we were right beside them, then they jumped out in front of us and yelled “boo!”. I nearly soiled myself.

“Oh, hi. Nice trick. Now get out of the way, we’re trying to walk to the park”, said Spotty.

“WOOOOWWWWWWW!”, said Zeke. “How did they do that, Tall Guy?”. It was like his dead grandmother had beamed down Star Trek style. He clearly had no idea how Jane, Eliza, and David had materialized. The last time he saw them was when they were leaving the house earlier in the day. They had jumped in the van and disappeared a few hours ago, and then – from his point of view – had magically re-appeared in this random location while we were out for a walk. His reaction was the same as yours or mine would be if we’d just witnessed a mind-bending card trick performed right in front of our face. He was laughjumping.

I love that aspect of Zeke’s personality. He’s happy almost all the time. Simple things excite him. He likes to like things. Spotty and I tend to be more pragmatic. That robs us of the joie de vivre that Zeke has, I think.

I wish I could live my life in a constant state of joyful wonder like he does. Magical things happen all around me on a daily basis, but I’m so caught up in my daily worries that I either take them for granted or completely miss them. Zeke just enjoys being alive. He enjoys the magic. Zeke lives in Wonderland.

One day, firetrucks showed up at our neighbour’s house. Apparently, their CO2 detectors were going off. That’s the pinnacle of excitement in the Canadian suburbs.

When Zeke heard the sirens he snapped awake from a deep sleep and howled like a wolf. It was the first and only time he’s ever done that. Howled, I mean. He wakes up quite a bit.

“What was that all about?”

“Are you sure? Because it sounded a lot like my cousin Andy.”

“I think you’re fooling me. I’m sure that was Andy. He said he was going to be a fire truck when he grew up.”

“Huh,” said Zeke, as he lay down. “They should make fire trucks say ‘Watch out! I’m a firetruck!’ instead of making them sound like Andy. People might get confused.”

He was fast asleep again in less than a minute. Dogs spend no time or energy at all thinking about things that aren’t currently happening.  Past and future are not relevant. I, on the other hand, stayed awake for two hours wondering where Andy might be, and whether or not he actually sounds like a fire truck siren. I bet he does.

I was watching TV with Zeke curled up at my feet, asleep. The show was a crime drama, and one particular scene had a dog guarding a compound at the end of an alleyway. He was behind a tall chain link fence barking aggressively at a man further up the alley. The camera started out near the man, so the dog was at the end of the alley and sounded distant and echoey, as you’d expect. Zeke opened his eyes to see what all the commotion was about. When the camera cut to a close-up of the dog he sprang to his feet, staring at the TV with his head cocked.

“How did that guy do that?” he asked.

“How did he get here so fast?”

The camera cut back to the long shot.

“WHAAAAAAT? That guy is SO FAST!”

He moved right up to the TV screen, pressing his nose against it.

“It’s a trick. He was filmed from far away and then from up close, then some people edited it together,” I said.

“So then the man with the camera is really fast?”

“No. The man and the dog both move at regular speed. They film the scene two times; once with the camera close to the man, then again close to the dog. Then they chop the pieces up and put them back together so it seems like the dog is close and then far away. It’s kind of like chopping up a carrot and then sticking it back together with Cheez Whiz. Two different things stuck together to make a tastier thing.”

“I love carrots and Cheez Whiz.”

“Is the dog the carrot or the Cheez Whiz?”

“I think the dog is the carrot.” 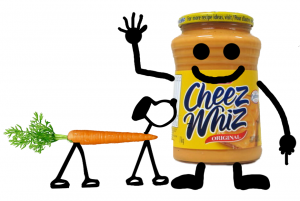 “It’s sort of the same shape. And a Cheez Whiz jar is kind of man-shaped.”

“Probably. Should we go for a walk now?”

Zeke had figured it out in a way that made sense to him and was close enough to reality that I didn’t see any point in explaining it any further. Now when he watches TV, I frequently catch him mumbling “Carrot…Cheez Whiz…carrot…Cheez Whiz…”.

We’ve started going for walks twice a day because I’m tired of resembling a jar of Cheez Whiz.

We were sitting in the backyard enjoying the summer sun when a helicopter flew over us. Zeke glanced up at it and said, “That bird sure is farty.”

“Whatever it is, it sure is farty.”

“Those aren’t farts. It’s the sound the engine and rotor blades.”

“The mommy calls you a fart machine sometimes.”

“This is different. This is an actual machine”

It usually starts snowing in late fall where we live. Most of the time, we’ll get a few frosty nights, then a skiff of snow will fall and quickly melt. It takes a few days for the ground to get cold enough for the snow to stay.

Sometimes we get slammed with a blizzard and go from green grass to  2 feet of snow within a few hours. It’s particularly unsettling when it happens overnight. Going to bed when the weather is reasonably pleasant, then waking up to what is, for all intents and purposes, the aftermath of an avalanche, always leaves me feeling slightly off-balance.

“What happened to the ground? It’s not there anymore,” said Zeke.

“It’s still there. It’s just under the snow.”

“Where did the snow come from?”

“The sky. You know that. We’ve gone out in a snowstorm before. You like catching the snowflakes.”

“Yeah, but those are little snows. I’m pretty sure I would have heard a big snow like this when it landed. I would have made a thud or something.”

“That’s what all the little snows look like when they land on top of each other for a few hours. They pile up. Like how your dish looks empty until I put food in it.”

“No. I’d rather like things. All things have something good about them. It feels nicer to pay attention to that than to be angry all the time.”

I took a moment to think about what he’d said.

“You know, Zeke, most people think that we know more things than dogs. Maybe we do, but I think dogs know important things that we don’t.”

“Everything knows something that no other things know.”

For a dog who lives with a sense of wonder, he sure is down to Earth sometimes.