“Have it your way” – King Burger the First

I arrived home after a typically dreary day at work. I’m not a guy who loves his job. I’m a guy who goes to work because he has bills to pay, which results in me thinking about the point of my own existence a lot. Surely I’m on Earth to do more than ride a bus for ten hours a week so I can spend 40 hours a week doing something I hate just to make money so I can buy things from other people who probably hate their jobs. 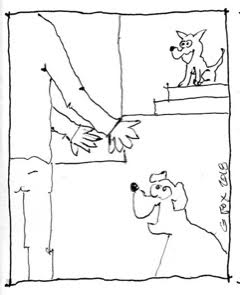 As usual, Zeke and Spotty Dog were waiting to greet me. In the ten seconds of barks and licks and dances that constituted Zeke’s greeting, I was feeling fine again. Spotty just sat at the top of the stairs, calmly smiling and waiting. I always picture her as a Southern Belle fanning herself and saying, “Well I declare! Yonder tall fellow has returned.”

One of my favourite things about dogs is that they’re never bitter or angry that you left them alone for a while. They’re simply happy that you’ve come back. How can anyone doubt the point of being alive when a dog has just told them how great they are and that the point of being alive is to be his friend? Everything doesn’t have to be complicated.

“Hi best friend. I had to go to work. Just like yesterday.”

“DID YOU BRING ME ANY CHEESEBURGERS?”

“HOW ABOUT A SQUEAKY TOY?”

“I just need to get chang…”

“BUT YOU’RE TALL AND I NEED TO REACH.”

…Squeaky Duck is under the couch. I can’t reach him. I brought Yourkong instead.”

“Your Kong stays inside. Last year you buried it in a snowbank and we didn’t find it until Spring.”

“No, I have to keep Yourkong in my mouth when I pee. It helps me relax.”

“I buried him. What’s for dinner?”

I think training a dog to go outside to the bathroom is a misguided idea in a climate like ours. We get months of very cold temperatures and snow. No matter how hard I try to keep up with picking up poop, I always miss a few piles a week. That adds up. When Spring arrives, there’s quite a mess to deal with.

For years I’ve been trying to convince Jane that we should replace the carpets with tile flooring. We could teach Zeke and Spotty Dog to do their business in a corner somewhere. It’d be easy to clean, and we’d all get to stay warm. We could even try to teach them to use a litter box. She’s not open to that idea at all – even though the cat gets to poop inside – so for the foreseeable future I’ll be picking up turdsicles and blocks of frozen urine until Spring arrives and the back yard turns into fecal jambalaya.

“If you still had your plums, they would freeze and fall off.”

“Well then can you at least let me out to go pee?”

“My pee froze right to my ding dong.”

As usual, my first stop when I got home from work was the bedroom. I emptied my pockets (keys, USB drive, some change and a $5 bill) onto the bed before changing into my play clothes. 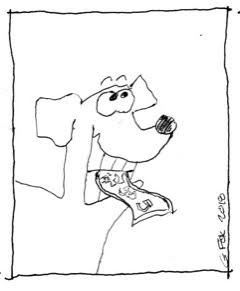 Zeke raced in, snarfed up the bill, and took off. It happened in about the same amount of time it took for you to read this sentence. I chased him out into the living room where we faced off across the coffee table. He knew he had the upper hand. Every time I took a step to the right, he took a step to the right. I stepped left, he stepped left. He was trying to get me to chase him around the table, but I’m too smart for that. I gave up on trying to get my money back.

Sometimes when he gets a certain look in his eye, there’s no reasoning with him. He won’t listen like usual. The wild part of his brain is in charge.

“I understand that, but I need the money.”

“Is this the only money?”

“Then I’ll keep this one, and you can get one of the other ones.”

And with that, he looked me right in the eye, squinted like Clint Eastwood, tilted his head back a little, and swallowed the bill whole like a baby bird swallows regurgitated worms.

A couple of days later, Zeke pooped out the $5 bill. It was wrapped neatly around the piece of poo and sort of resembled a brown and blue barber’s pole. It looked like it was still in one piece. I picked up the turd with a clear plastic bag and took it to McDonald’s and tried to buy a milkshake with it. 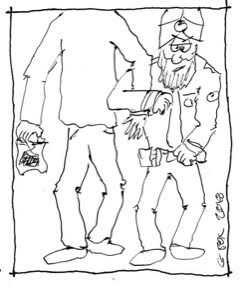 The lady at the till refused to take a piece of dog poop as payment, but I insisted it was still legal tender because the serial numbers were visible. She called her manager, and I insisted he take my money. He was very uncooperative and I let my temper get the best of me.

The cops thought it was funny.

I smelled it as soon as I got in the front door. It was one of those smells that you also taste (see video below). One or both of the dogs had “had an accident”. That’s what dog people sometimes say instead of “pooped all over the place”.

I found Zeke by the back door. He’d obviously gone there to try and get outside. Eventually, he couldn’t hold it. Even though there was diarrhea all over the kitchen, at least it wasn’t all over the carpets. Poor guy, he looked miserable.

“I don’t care about the poop. I’m worried about you. How’re you feeling now?”

“That’ll teach you to steal the kids Halloween candy.”

“You think that’s what it was? How could something that felt so good turn out to be so bad?”

“A lot of parents have asked that question. Did you eat anything else other than your regular food?”

“I’ve been peeing through my bum all day.”

“That explains the smell.”

“Yes. Well how about if you go outside now, and I’ll get busy ripping out all the drywall.”

“Don’t eat too fast. You swallow too much air and it makes you gassy.”

“You can never swallow too much of anything *starts gobbling* I love my dinner. It’s super yummy.”

“I have to go outside now because my food is all turned into poo.”

“It doesn’t happen that fast. You just swallowed the last bite 4 seconds ago.”

“I’m eating my dinner. Wait for a couple of minu…”

“The poo is sticking his head out of my bum.”

“I should have adopted a snake.”

“Can I finish my dinner now?”

“Oh. Right. Then what’s for breakfast?”