“You have the dog hitting stick!” – Zeke Andrew Pancakes

The people at the SPCA couldn’t tell us much about Zeke’s history. He’d been found wandering beside a major highway north of town, and he was about a year old. That was all they knew. That and the fact that he was a really nice guy.

He’d been with us for about a year and a half when I discovered something about him that really bothered me. lt made me feel powerless and angry.

One evening, I grabbed my hockey bag from the basement and brought it upstairs. I’d just started playing again, so he’d never seen my gear. When Zeke saw the hockey stick, he immediately backed into the corner and cowered. His ears were pinned back and he was shaking. He peed a little. He was terrified.

None of us had ever raised a hand in anger towards him, never mind a hockey stick, so this was obviously something he’d come to fear before he joined our family.

“You have the dog hitting stick!”

“This is a hockey stick. I’m going to play with my friends.”

“You and your friends play by hitting dogs? Why?”

“No! Of course not! We play hockey. You know how sometimes we watch hockey on TV?”

“Right. But sometimes I watch it and you sit beside me.”

“Is that the thing Jaro McGinla does? I like him. I would like to meet his dog.”

“Listen pal, I’m going to skip my hockey game tonight. I want you to tell me what happened to you before you joined our family. Sometimes when you tell somebody why you’re scared, you don’t feel as scared anymore.”

Zeke in his own words… 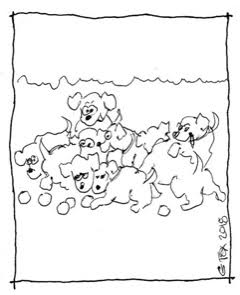 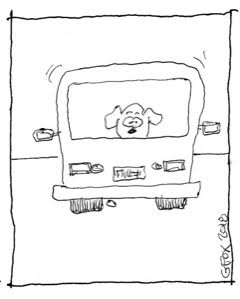 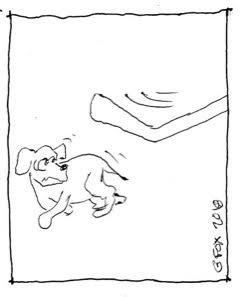 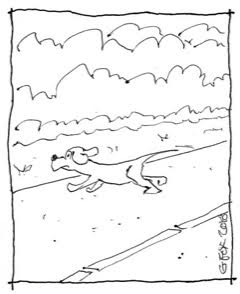 i liked being away from the yard did you know that people leave food outside their house for dogs? well they do and they put it in nice bags so it’s all together and all you have to do is open the bag and you can eat so many good things 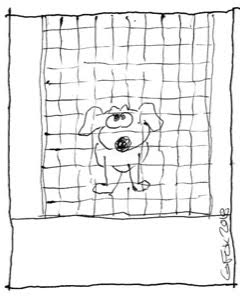 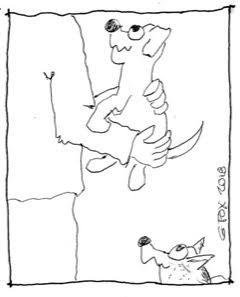 From that moment on, I kept my hockey equipment in the trunk of the car so Zeke would never have to see it again. It was a small accommodation to make sure he felt as safe as possible in our home.

I think that deep down he knows what happened to Fiona, but he needs to keep it buried for his own sake. We all have things we’d rather not talk about.

Despite everything he’s been through, Zeke remains a happy-go-lucky dog. His sense of humour plays a big part in keeping him sane, I think. And, like all dogs, he’s blessed with a natural ability to exist in the now. What has happened can’t be changed. Nobody knows what will happen in the future. So why worry about anything except this moment? And for most of the moments in his life so far, Zeke is happy.