“This moment will never come again. I know it because it has never been before.” – Victoria Williams

Summer is a short-lived season in most parts Canada. It’s usually May or June before people with tents will go camping for the first time. It’s July or August until the lakes are warm enough to swim in, although I’ve seen people dare in May and June.

Zeke Andrew Pancakes loved being outside, no matter what the weather was. He ADORED camping because it meant he spent all day, every day, outside. Both he and Spotty Dog enjoyed that they didn’t need to be inside a house, or on a leash, or even in a fenced yard. They could do as they pleased. I enjoyed watching them being free-range dogs.

Our favourite spot was a couple of hours north of the city. Our friends, Jennifer and Neil, owned 300 acres of Aspen forest. There was a small glade in the middle of that forest which they allowed us to pitch our tent in. There was no cell phone coverage, no electricity, no plumbing. We’d be away from civilization for a week. It was paradise except for the “no plumbing” part.

There was no chance of anyone other than our friends coming to the glade, so we never tied the dogs up. They could just run free all day, chasing squirrels and paddling in the creek. Our friends told us there was a lot of wildlife around, but we only saw the occasional deer. The bears avoided us for the most part, and we’d heard there was a wolf pack that frequented the area but we’d never seen them or even seen any evidence of them.

Milne Lake was south of the forest. There was a path that wandered through the woods that led right to it. It was like something out of a fairytale, with the sunlight dancing through the trees.

The lake was a shallow body of water, which meant it warmed up pretty quickly after the spring thaw. The locals were there a lot because it was friendly to swimmers and boaters. No dogs were allowed on the public beach, so we always headed over to a not-very-well-known secondary boat launch at the far northern tip of the lake. There were a couple of picnic tables, but no beach. We’d just walk down the concrete boat ramp and we’d have a nice, private place to swim. The kids loved it. The dogs loved it. Jane and I loved it.

If you’ve never been swimming with your dog, you’re really missing out. A dog spends most of his life looking up at you, and you down at him. It changes the dynamic when you’re both submerged and have only your head above water. You look each other in the eye as equals. Just two mammals going for a swim.

Zeke would spend most of the day swimming in figure-8s. He’d stay in the water for 20 minutes or so, then come out for a snooze and some nude sunbathing. Twenty minutes later, he’d be re-charged and ready for more figure-8s. We never had to worry about him. He knew to stay close to shore because of an incident that had occurred a couple of years earlier.

“Good idea. We can eat it for dinner.”

“WHAT? NO! I want him for a friend. We can take him home. His name will be Fish Zeke.”

“Got it.” he said as he was sprinting towards the lake.

He’d been swimming for about 10 minutes when a boat launched. Zeke was well out of the way, and the owner knew he was there because his dog had also gone in for a dip while he was preparing his boat. However, when the boat slowly started making its way out into the lake, the wake – while small – was big enough to spin Zeke around and make him lose his bearings. He wasn’t in any danger of going under, but I could tell he was disoriented. He was swimming further out into the lake.

I called out to him to let him know I was coming and started to swim. By the time I caught up with him, we were about 50 metres from shore. This put us well out of the safe area for swimming and well into the boating area. Spotty Dog, who had a habit of being overly dramatic, stood on the shore yelling ‘TWO LEGGER! SAVE ZEKE! SAVE HIM!”

When I reached him, Zeke said “Hi tall guy”.

“Well…you sure are far away from the shore right now. I think we should head back in.”

“Whatever you say. I’m still lookin’ for a fish, though. Hey…what’s that?” 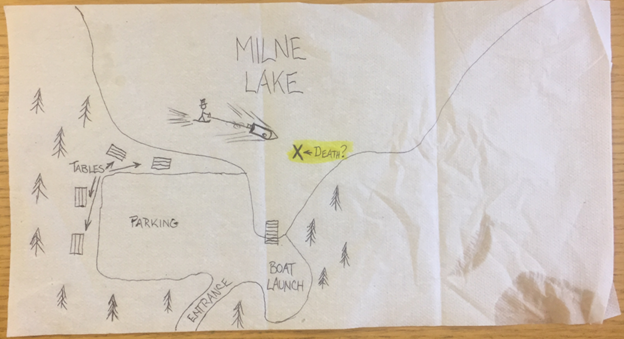 I turned my head to look in the direction he was looking and saw the ski boat speeding towards us. It was very close and quickly getting closer. I thought, “This is it…we’re going to die.” There was no way the person piloting the boat could have seen us, nor would he have had any reason to expect swimmers to be that far out. The boat was bearing down fast. There was nowhere for Zeke and me to go. I felt certain we were going to get hit…but we got lucky.

The boat missed us by less than 5 feet. It looked so big from water level. If you can imagine laying down in the middle of a road and having a speeding pickup truck miss running over you by less than an arm’s length, that’s what it felt like. It was close enough that the water it was pushing out of its way instantly sent us another few feet toward shore.

We’d miraculously escaped being smashed by the boat, but there was still the skier it was towing. The skier, carving a lazy arc, saw us just in time. Instead of falling backwards or trying to make a quick turn, he had the presence of mind to lean forward, burying the tip of his ski in the water. It was an astoundingly good course of action and it had the effect of slingshotting him over our heads, but his ski still clipped me on my left shoulder and cut me.

Zeke was the first one to get his bearings. He seemed to be unhurt, which was a relief. I was far more worried about him than I was about myself.

“SHARKS! THEY SMELL YOUR BLOOD AND IT MAKES THEM HUNGRY AND THEY EAT YOU UP I SAW IT ON THE MAGIC PICTURE BOX!”

“Don’t worry. Sharks live in the ocean. We’re in a lake.”

“I DON’T KNOW WHAT THAT IS BUT SHARKS ARE COMING RIGHT NOW I KNOW IT! RUN!”

The skier had re-surfaced and was swimming towards me, cursing in the most creative manner I’d heard since my grandfather had passed away. We’d thrown a pretty good scare into him. At least as big as the one he’d thrown into us. He was really angry that we were so far out in the lake. If lake rage is a thing, the skier had it.

Zeke turned around and started swimrunning back towards me, apparently intent on saving me from the Cursing Lake Shark.

“TALL GUY! LOOK OUT FOR THE SHARK!”

“DO YOU LICK YOUR MOTHER WITH THAT MOUTH MR. SHARK?”

It took about 30 seconds for the boat to circle back and pick up the skier. The pilot leaned over the side and yelled “NADAFINGA!” at me, and sped away as soon as his friend was aboard.

Zeke and I made our way back to shore. He wouldn’t stop talking about “the potty-mouthed lake shark” for the rest of the day. I later overheard him asking Spotty Dog what a “nadafinga” was. Her answer was accurate and profane. I’m certain that he blushed so intensely that this was when his nose turned permanently pink.

We walked back to the campsite in the late afternoon. Jane prepared some burgers and salad while I got the BBQ going. At home, we use a propane BBQ like most people do. When we’re camping we use charcoal. While it’s not as convenient as gas, I prefer it. I think it makes food taste better. It might be in my head, but that doesn’t matter. If I think it tastes better, then it tastes better. That’s how brains work.

Zeke, Spotty, and the kids were trying to catch tadpoles in the creek. Zeke still wanted a fish friend. When Eliza told him that tadpoles were baby frogs, not baby fish, he simply said, “OK, then I’ll have a frog friend and name him Frog Zeke.” He’s so easy going. He never makes a fuss over things that don’t need a fuss made over them. I love that about him.

We ate our dinner, and then we all broke off for a little bit of “me” time. Eliza read by the firepit with Spotty sleeping beside her. Jane set up her easel and went about painting the campsite. David was off in the woods exploring with Zeke. I sat by the creek with my guitar.

A couple of hours later, it was starting to get dark. Time for everyone to get ready for bed. We washed up and got our pyjamas on, then sat by the fire toasting marshmallows and recounting the adventures of the day. In many ways, this was my favourite part of the day. Any drama that had occurred was either forgotten or laughed at when it was recalled. It was family time, and we all instinctively understood how lucky we were to have each other. That only seemed to happen when we were camping. After an hour or so, the fire had started to die down. David was asleep in Jane’s lap. We poured a bucket of water on the fire and went to bed.

It was a beautiful, clear night. No wind, no clouds, and the heat of the day lingered so that even though we were outside, it was room temperature. I decided to unzip the roof panels on the tent so we could lie on our backs and stare out into the void. Since there was no electricity and we were an hour away from the closest town, there was no light pollution. The complete blackness was calming. The number of stars that were visible is difficult to describe to someone who’s never been out of the city. It felt like you could let go of the ground and just fall out into the universe.

Without being maudlin, our view of the Milky Way made me think that it probably wouldn’t have mattered if Zeke and I had been killed by the boat or Lake Shark that afternoon. I realized how small we were, and how insignificant our existence was. I felt completely at peace.

“Can you close the windows?”

“I’m scared that I might wake up in the middle of the night and see something I don’t want to see looking back at me.”

I hadn’t heard of any bigfoot sightings, but I understood Zeke’s worries and zipped up the roof panels.

Satisfied, he curled up at my feet, and we all had the best night’s sleep that we’d had since last night.